Registrations are open for the 5th Zoggs Medes Islands, this year both competitive and non-competitive 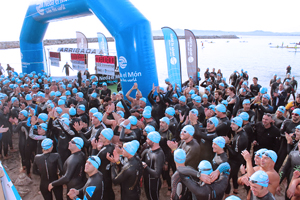 Today August 4th we are opening registrations for the 5th Zoggs Medes Islands for la Marató de TV3, one of the most emblematic swims of the Neda el Món calendar, which reaches its 5th edition this year.

The event will be held on November 2nd in L'Estartit and as a novelty of this year, it will include a competitive and a non-competitive version of both distances (5,200 m and 3,400 m).

We at Neda el Món do not want to give up the non-competitive concept we have always promulgated, but at the same time we have listened to the demands of those swim addicts asking for some healthy open water competition.

Once again it will be a day for solidarity, since 100% of the profits will go to la Marató de TV3, this year dedicated to heart diseases. A good reason to share a fantastic day in the unique environment of the Parc Natural del Montgrí, les Illes Medes and  Baix Ter.

So, registrations are now open, you just have to choose the distance and the type! Come on, swim addict! Either competing or not, the 5th Zoggs Medes Islands for la Marató de TV3 will be a celebration of solidarity and open water swimming!